Showing posts from May, 2013
Show All

May 28, 2013
Janis CIRKSIS was a displaced person (DP) after the Soviet union annexed Latvia and the Baltic states during WWII. This is a continuation in the series of letters that he received from his homeland, translated into English.  To see the other letters in the series click   HERE . This the 6th letter in the series, is a little unique from the other letter so far in that it appears to be a response to a letter Lidija (Janis's new and somewhat controversial wife) wrote to Kate (Janis' sister). Most of the letter is about this relationship with a little bit at the end addressing the day to day life in Nica at the time. I just had a look at the original letter associated with this translation and it is a marvel that the very small writing was  legible! No doubt being able to zoom in on the digitised copies played a crucial role in their translation. For more information on having your old Latvian documents translated please click  HERE 17.9.47, at Nica My dear brother and de
Post a Comment
Location: Nīca, Nīca parish, LV-3473, Latvia
Read more

Before I comment on the next letter in the series, I would like to thank those of you who commented on the posts and those who have contacted me on twitter and google+. I really appreciate the positive feedback I have been getting! At this stage most of it has been about this series of letters which makes the hole process of having them translated and publishing them here seem even more worthwhile. If you have any latvian documents that you wish to have translated I can recommend the very helpful lady who is translating these letters for me. Not only has she translated the letters but she has also provided me with invaluable contextual backgrounds to many of them. For further enquiries please type the following address into you email client (I have posted the address as an image in order to reduce spam): Janis CIRKSIS was a displaced person (DP) after the Soviet union annexed Latvia and the Baltic states during WWII. This is a continuation in the series of letters that he rec
Post a Comment
Read more 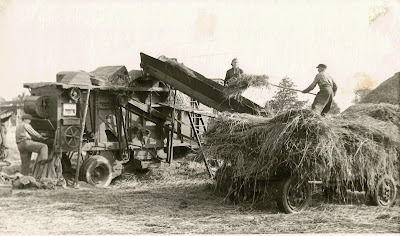 Janis CIRKSIS was a displaced person (DP) after the Soviet union annexed Latvia and the Baltic states during WWII. This is a continuation in the series of letters that he received from his homeland, translated into English.  To see the other letters in the series click   HERE . This is the fourth letter in the series. In the last letter Janis' sister and mother seemed a little upset with Janis'  decision  to marry while away from home - and while his  girlfriend was  waiting for him to return from war. This letter is quite brief, no new  revelations, however the second half contains some information about life on the farm during the early years of the occupation. When I read these letters, I  sometimes  wonder how much of them to publish on the  internet. I'm not certain how Janis would feel about these private letters being made public. The last letter in particular seemed quite personal. This letter might not contain a lot of interesting information.   Up until now I
2 comments
Read more

Life after 50 years in Latvia: Part 2

May 02, 2013
Note: This is part two of a two part series, to view the first part click HERE .  The following is from a speech which Janis CIRKSIS delivered detailing his experience as a Latvian returning home after 50 years of Soviet occupation. It was written in around 1997 so most likely a lot has changed since then. It is a deeply personal account of his experience and by no means is it intended to be indicative of a more general experience. Having said that, it does express many of the daily struggles of Latvians as they tried to reestablish their independence after 50 years of occupation. The original document is written in a script font and thus I have had to transcribe it manually.  In order to publish something this week, I have decided to break it (arbitrarily) into 2 halves. As per usual, I would love to hear from you. In particular  How do you think life in Latvia has changed since 1997? Life after 50 years in Latvia: Part 2 One of my younger day lady friends, a retired schoolt
Post a Comment
Read more
More posts